“Give ‘Em Pumpkin To Talk About!”

A creamy, simple yet delicious crustless pumpkin pie that has all the flavor and nutrients but way less carbs, sugar and calories than the more traditional pumpkin pie.

Pumpkin pie isn’t something we normally eat in South Africa – we’re much more partial to pampoen koekies (the Afrikaans version of pumpkin fritters, literally translates to “pumpkin cookies”). Traditionally, Americans serve pumpkin pie on Thanksgiving Day. Creating this recipe was my first go at making pumpkin pie, but I can promise you it won’t be my last!

I guarantee you’ll love this recipe, even if you’re not overly fond of pumpkin. This recipe makes a heavenly light, mild, creamy dish that is in no way “wet” or “jiggly”. This classic pumpkin pie is much more milder and creamier than the more traditional, higher-carb counterpart. It’s also gluten-free and sugar-free. The carb content of this recipe will depend on whether or not you’re using sugar alcohols (xylitol, erythritol)/stevia, or if you turn to more commercial “low-carb” sweeteners.

It takes a lot of self-control not to devour this dish as soon as it comes out of the oven and leaves your home smelling like pumpkin-cinnamon goodness!

But if you can resist giving into temptation and devouring it all at once, save a not-so-guilty-pleasure slice for breakfast the day after. Yum!

This crustless pie can be served either hot or cold and as a veggie accompaniment to a main meal, or as a dessert, or breakfast.

Sprinkle with a mix made up of equal parts ground cinnamon and xylitol for extra sweetness.

Any low-carb sweetener can be substituted in this recipe. Honey, especially, will make a great substitute, but then remember to account for the additional carbs.

The coconut oil can be substituted with butter, ghee or non-stick cooking spray. 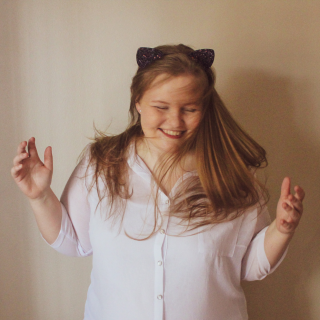 I’m the whimsical rebel that transcends fears… A curvaceous, crazy little cat lady (although I love dogs too!) born of the Harry Potter generation, my curiosity rivals that of my two chaos-loving Munchkins. By day, I'm a health and Banting (LCHF/Keto) coach studying towards a bachelor's degree in psychological counselling. By night, I'm an aspiring author, foodie and dancer. I live to empower, inspire and influence others to overcome their fears so that they can be their best selves and live their best lives. Now... watch me take over the world...

Saw this quote recently and this selfie made me think of it... "People are like stained glass windows. They glow and sparkle when it's sunny and bright. But when the sun goes down, their true beauty is revealed only if there is a light from within." 🎇🌅🔥 #quoteoftheday
Feeling a little blue...** 🌈 #weddingguesttoday
Pizza night with the fam! 🍕 I don't often eat pizza. Because of my celiac disease, I cannot eat normal wheat-flour base pizzas without suffering uncomfortable side-effects. And making low-carb pizza from scratch isn't usually what I feel like doing when I have a pizza craving... 😂 So, every now and then I treat myself to a few slices of gluten-free pizza. Hey, I'm only human! 😉 #pizza #haveaslice #pizzababy #cravings #glutenfree #romanspizza #familynight #treat #justaleetlebit
SHE LIVES!!! (... though my body feels dead after the last few weeks! 😂😂😂) To sum up... Finished the exams for my programme in counselling children & adolescents, moved house, got invited to join a new coaching initiative called Skills4Me next year, finishing up my health coaching portfolio, getting ready for my Banting coaching exams aaaand lost and then promptly found Rebel during the big move... This is me at the door of my first *adult* house. No more bachelor's apartments for moi! In this pic, I'm tired, hot and sweaty.. but I'm also pretty happy. Because I know that this is where the magic is gonna happen. This is where I'm gonna make it happen! I'm exactly where I want to be... ☺🏡 #movinghouse #newhome #adulting #update #busybee #crazybusy #shelives #wheresthecat #studentlife #coach #ineedavacation
Here's to the Munchkins who run the world...** #roarrr #HappyWorldAnimalDay! 🐱🐈
Because you owe it to yourself to become everything you've ever dreamed of being...** 🌻 #Hermanus